In the US, those already vulnerable stand to be the most negatively impacted from COVID-19 related health and economic crises. This piece is the second of a three-part blog series focusing on disproportionate consequences of both COVID-19 and efforts to limit its spread for minority-owned and low-income-area small businesses. Equity needs to be at the forefront of economic relief and recovery efforts to ensure we are best positioned to further build an inclusive economy. Doing otherwise will only deepen our country’s racial health and wealth gaps.

As COVID-19 began spreading around the globe, it became obvious that the virus does not discriminate based on race, ethnicity, income, or any other demographic characteristic. However, this does not mean that everyone’s chances of being hurt financially, falling ill, or succumbing to the virus are the same. As a fuller picture of the COVID-19’s impact emerges, we see that some communities are feeling the effects more than others. The disproportionate impact of the pandemic on minorities and those in low and moderate income communities both exacerbates and highlights the additional disadvantages these groups have been facing for decades or longer as a result of discriminatory practices and policies. 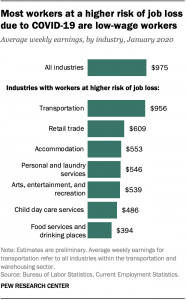 As Interise has discussed in our Bridging the Wealth Gap report, minority-owned small businesses and those operating in low-to-moderate income communities are at a distinct disadvantage when it comes to starting and sustaining a thriving small business. Small businesses are key job creators within their communities, and business owners of color are more likely to hire employees of color. Because individual business owners, their employees, and their communities are interconnected in an ecosystem, it is apparent that the disproportionate impacts of the COVID-19-related health and economic crises on certain groups of people are also disproportionately affecting their businesses.

Despite calls by government and civic leaders for the release of data on the race and ethnicity of COVID-19 patients, most agencies have not published these statistics. The numbers that have become available so far suggest that the black community has been hit especially hard. For example, the state of Illinois has a population that is only 14 percent black, but as of April 21st, 25 percent of confirmed cases and nearly 40 percent of deaths have been black. Other locations releasing data by race – including North Carolina, Louisiana, Chicago, and Milwaukee – show similarly disconcerting patterns.

Black Americans are not the only people of color being disproportionately impacted by COVID-19-related illness. NPR points out that in New York City, for example, 34% of all virus-related deaths came from the Latinx community, which comprises only 29% of the city’s population. As of April 8th, black and Latinx residents were twice as likely to die as a result of COVID-19 when compared to their white neighbors, reports the New York Times.

Although the rates of illness and death are the starkest indicators of the inequalities exposed by the pandemic, many economic markers also signal the disproportionate financial impacts on these people. A Pew survey conducted in March found that nearly half of all Latinx respondents lived in a household with someone who had either taken a pay cut or lost their job compared to only a third of the U.S. population as a whole. Pew also found that black and Latinx workers also have slightly higher rates of employment in industries that are more likely to be affected by the pandemic, such as retail and food services.

In fact, many black and Latinx workers are already facing precarious financial situations, which will only be exacerbated as the full economic effects of the pandemic set in. The Bureau of Labor Statistics (BLS) reported that the black unemployment rate in March was 6.7 percent, the highest of any racial/ethnic segment of the U.S. population, which averaged 4.4 percent unemployment as a whole. The Latinx community has the second highest rate of unemployment at 6.0 percent and was tied for the highest increase in unemployment from February to March at 1.6 percent.

Workers with lower incomes are also affected by the pandemic at a higher rate than the average American. A Pew survey found that the average weekly income was $975 in January 2020, much higher than the same measure for people working in most high-risk industries. Pew also found that more than half of lower-income Americans live in a household that has experienced COVID-19-related job loss.

In addition to earning less than the average American, workers in these industries are more likely to lose their source of income and any benefits, including health insurance, they may have had through their employer. Those who are able to keep their jobs are often unable to work from home, explains the New York Times, requiring them to wrestle with choosing between their paycheck and the health of their families and themselves. The Washington Post reports that while one-third of all white workers are able to do their jobs remotely, the same is only true for 20 percent of black workers. Individuals earning lower incomes have also historically been less able to work from home than those with higher incomes, per the BLS. As the impact of the virus spreads throughout the economy, the direct economic impact on minorities and those in low and moderate income communities will worsen, based on estimates made by the New York Times.

The disproportionate impact of the pandemic on certain people is not the result of randomness or poor judgement in some communities. For many, the root of inequality can be traced back to over 200 years of slavery, followed by over 150 years of systemic racism, evidenced by redlining, community disinvestment, reduced access to capital, and other policies and practices designed to exclude disadvantaged people. The Washington Post reported that economic inequality in the US is higher than it has been in at least 50 years, resulting in intergenerational poverty, poor health, and numerous other effects that leave many people at a much higher risk than their wealthier counterparts. The only way to address the disproportionate impact of the COVID-19 pandemic is to address long-existing inequalities by making equitable changes at the systems level. We must treat not only the symptoms, but also the disease.