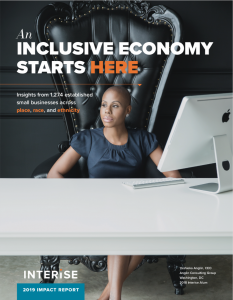 Interise’s 2019 Impact Report, An Inclusive Economy Starts Here, shows, undeniably, that small businesses play not only a crucial role in job creation, but also hold the keys to solving one of America’s most intractable problems: economic inequality.

Consistent with Interise’s prior impact reports, this year’s report shows that

A central focus to Interise research is to understand system failures that are holding back small business led economic development, and how a system-thinking approach can unblock and propel forward the change we are all striving for — a truly inclusive economy. We ask that you join us in this movement by sharing insights from our 2019 Impact Report, and by joining us at Interise2020.

Consistent with previous Interise Impact Reports, Interise companies continued to create good jobs with salaries and benefits that exceeded the private sector. The average salary of new full-time positions registered at $53,700, which was $1,740 or 3% higher than the national average in 2018.

Business owners also reported that 60% of their full-time staff was hired from within their community. Minority- and Latinx-owned businesses hired greater percentages of their employees from the local community than white-owned businesses.